Research Fellow at Media Matters for America in Washington, DC 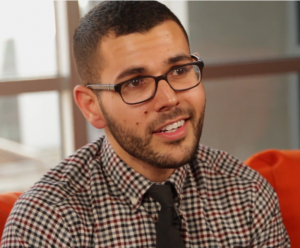 I work as a researcher, writer, and video producer at a progressive media watchdog organization called Media Matters for America based in Washington, DC. My work has focused on combating misinformation on LGBT issues, but I’ve recently expanded to focus on a host of other important progressive issues.

Tell us about an interesting project that you’ve worked on recently.

In 2014 and 2015, I helped produce original investigative reports debunking misinformation about non-discrimination protections for transgender people in public accommodations. I led a team in contacting state and city officials with experience implementing such laws and solicited original testimony that was used to produce first-of-their kind documents about the impact non-discrimination laws have on public safety. The reports I’ve worked on have been cited in local and state level debates over LGBT legal protections.

Be a good writer. Learn how to be a better writer. It’s totally baffling how much of being a working professional is really just knowing how to communicate effectively and write well. I’m lucky that I come from a family that encouraged me to write, but I’ve seen a lot of grown adults struggle with written communication and it really, really gets in the way of being a competent and efficient professional. Writing well is a wildly underrated skill.

Wake Forest is where I learned how to excel in research, writing, and constructing complete and compelling arguments. I competed for four years on Wake’s policy debate team, and I can’t stress how formative that has been in preparing me to do the kind of work I do today. I know that I wouldn’t be as effective as I am in my work had I not had the opportunity to work with such a talented, brilliant, and passionate debate team.

Three things: 1. Fight for chances to write – doesn’t matter what it is. There’s no greater sign of competency than someone who can communicate well. 2. Be a human – competency doesn’t do much for you if you’re a nightmare to work with. Be professional, but remember that everyone you work with is a human who wants to be treated well, be productive, and enjoy their day. You rarely actually need to be a jerk. 3. Be your own boss – people are busy and distracted and sometimes self-absorbed. That’s normal, it just means you need to make sure you’re checking in with yourself and asking things like “what can I be doing better?” and “how can I kick more butt than I’m currently kicking?” If you can grow on your own, people will notice.

Have you been mentored by anyone or served as a mentor in your professional field since entering the workforce? If so, what impact has that had on you?

I’ve been lucky enough to manage and mentor a handful of people since entering the workforce, and it’s been a pretty eye opening experience. Management is definitely it’s own skill set – you have to be able to read people, recognize what kind of communication works best for them, what their strengths and weaknesses are, etc. No two people are alike, and the more you cater to their particularities, the more success you’ll have with them. Mentoring has also made me learn to be less self-involved at work – the goal of mentoring is to give the person the guidance and space they need to kick butt – and that can’t happen if you’re breathing down their neck or letting your ego get in the way.